This is Roger Tinker owner and general manager of all star pest control in Columbus, Georgia. I would like to discuss what Formosan termites are, what they do and how to control them. Formosan termites 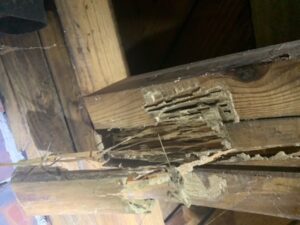 were discovered in Georgia about 1992. And I’ve been called the super termite because they destroyed much more wood quicker than other subterranean termites. As with subterranean termites. A colony consists of a queen that lays many eggs per days, and directs the activity of the colony, the workers and the Nymphs’ that forage for food for the colony. Soldiers that defend the colony from attacking ants and others that swarm to make and establish new colonies. The workers and the nymphs look like white maggots and need protection from the sunlight. They construct mud tubes for protection to travel from the shore to the wood found in buildings. Termites only need 130nd inch of a crack to towel through. In addition to traveling back and forth to the colony, deposit food and obtain needed moisture. For Formosan termites can bill carton nests within the walls of buildings. I was in a training conference a few years ago that featured a professor from LSU. She told us they had discovered that Formosan termites, had chewed in the joints in the flood walls and levees in New Orleans, you know the rest of that story. Formosan termite swarmed in the evening in late spring and early summer. Formosan termites can even swarm out of treasures they attack and live in trees. Control, in my opinion should involve several methods, a liquid treatment will stop destruction fairly quickly. However, using a baiting system helps reduce the number of termites around a building. The city in New Orleans use a baiting system of saved many old buildings from destruction. And that was a method that they found that worked when other methods did not work. In addition, a moisture meter should be used to locate any cartonnage that termites have built within the walls of building these nests need to be removed from within the walls. This information is basic information is no two infestations are the same

Waterbugs Are In Columbus Georgia All Year!

A Clean Sanitized Home In Columbus Georgia Can Help With Bugs

EXCELLENT Based on 162 reviews.

Dawn Allen
I 100% recommend this company. Great people to work with and I am now pest free. I can not say enough about the service and all around great attitude of everyone I deal with

Nancy Nunez
Kim has been coming to my home over a year and always professional with excellent customer service and mannerism!! I trust her without watching and I continue to do my work as she does hers !! She’s Awesome!! Thank you so much Kim !!

April Mcghee
They came out corrected the problem ASAP

Jon Meacham
Mrs. Kim is very professional, friendly, and always on time. We’ve been with Allstar for over a year now, and haven’t had any issues with pests. Would highly recommend.

Christine Hamilton
Catie is the most friendly and professional Pest Control Tech I have ever dealt with. Love her 💜

poppa falcon
Couldn’t ask for a better home pesticide service. Caty is a PRO!!! Looking forward to a continued relationship with this company for a very long time.

Tap Here To Call Us NOW!