Bug Bombs are NOT Good for Columbus Georgia Homeowners 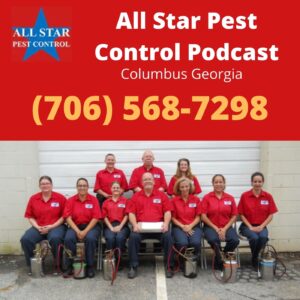 This is Roger Tinker, owner and general manager of all star pest control in Columbus, Georgia. I would like to discuss bug bombs and why I don’t like them. Bug bombs or total release control aerosols release a non residual chemical into the air where it’s placed. When applied properly, they pose no fire threat. However, labels can vary from one can trading 1500 square feet to one can trading 5000 square feet. The problem is many people figure that f1 can will kill bugs, then four cans will do better. The problem is it pour cans in a small space can may pose a fire threat. This can result in a home a building literally blowing up. This has happened before and will probably happen again. It’s like if a one pound hammer will kill him dead, then a four pound hammer kills them four times as dead doesn’t work that way. The CDC has stated that bug bombs are still killing people despite improved labeling. From 2007 to 2017. There were about 3200 cases reported to the CDC 20 cases or the life threatening and for reported deaths. If you’re going to use a bug bomb I plead with you to follow the label directions. I also implore you to read further or listen further to what I’m talking about. Before you use a bug bomb. Bug bombs will make the problem worse and scatter or run bugs that part of the house they were not in. Let’s talk about German roaches are normally found in the kitchen and bad thing marriage. When a bug bomb is sent off the mesh travels and will kill bugs close to the mesh. However, roaches further away they attack the mist and run in the opposite direction they get away from the mesh. They absorb summer chemical but not enough to kill them. This contact with the mass makes me more resistant to the mass of a chemical. This means more you bomb the last roaches you’ll kill out so you have now moved roaches in the bedrooms and other parts of the houses that did not have roaches in them. You made the problem worse. Bug bombs work no bedroom fleas his own way to confirm fleas and with the use of an IGR hope I have convinced you not to use a bug bomb. Call me if I can help you in any way.

A Clean Sanitized Home In Columbus Georgia Can Help With Bugs

Lady Bugs, Do They Cause Problems for Columbus Georgia Homeowners?

EXCELLENT Based on 168 reviews.

Denise Faulkner
I have been using all star for two months now and they have done a very good job of ridding my home of insects. Esp. Roaches and mice. I would tell everyone if you have problems with any insects use all star.. they are on time very nice and take all the steps necessary to rid you of all your problems.

Dawn Allen
I 100% recommend this company. Great people to work with and I am now pest free. I can not say enough about the service and all around great attitude of everyone I deal with

Nancy Nunez
Kim has been coming to my home over a year and always professional with excellent customer service and mannerism!! I trust her without watching and I continue to do my work as she does hers !! She’s Awesome!! Thank you so much Kim !!

Tap Here To Call Us NOW!